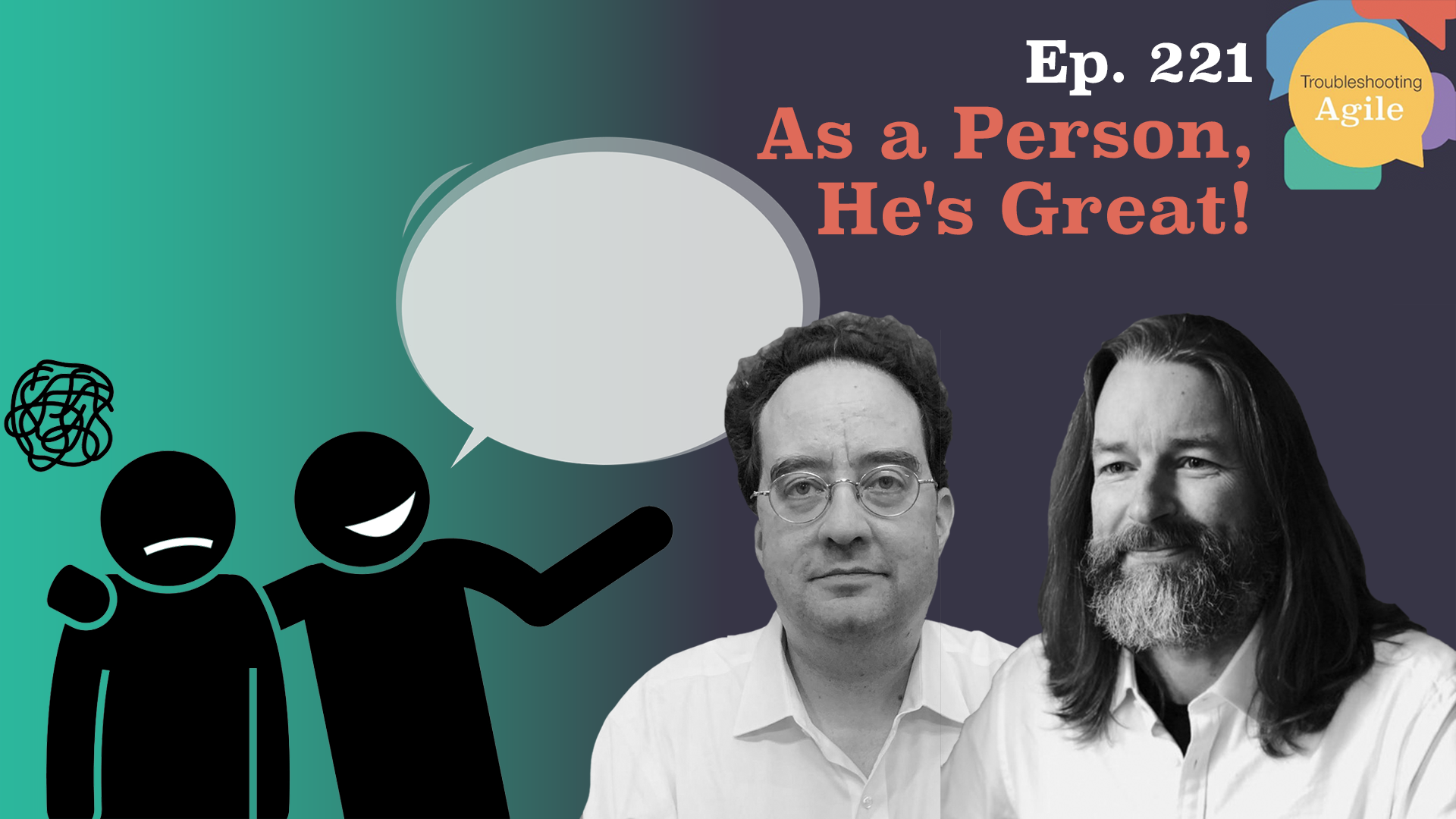 This is a transcript of episode 221 of the Troubleshooting Agile podcast with Jeffrey Fredrick and Douglas Squirrel.

Squirrel notices that when a client starts by telling him how great her relationship is with someone, it almost always signals a lack of true collaboration and productive conflict. Squirrel and Jeffrey discuss the difference between friendly and effective and the common confusion between being liked and being successful.

Jeffrey: Hi Squirrel. You told me you had a moment of searing insight this week and can’t wait to talk about it.

Squirrel: Yeah, that was fun. So for about the 4,720th time, I had a new client tell me about someone else in their team. They said, “Now, what I’ve got to tell you is that as a person, he’s great. We really have a great relationship, we can go down to the pub and chat about football. It’s totally fine. But this—,” and then he went into a long diatribe about many difficulties and reasons that they did not have, in fact, a great relationship. So my new rule is that if somebody starts the conversation by saying: “Now I get on great with this person, I really have a good relationship with him or her.” I’m going to immediately conclude that the balance of probabilities is this person has a terrible relationship with that person and I should pay attention to helping them. What do you think?

Jeffrey: I think that exactly mirrors the interactions I saw when I was doing the CTO mentoring circles because I was dealing with new CTOs typically, and I would tell them “it’s really important that you have a good working relationship with the CEO,” and I was often reassured in very similar tones, “Oh yeah, we have a really good relationship. We can definitely hang out. Everything’s fine.” I would then hasten to qualify “Well, that sounds like it’s a very comfortable relationship, but not necessarily effective working relationship.” I think you and I both agree that these are different things.

Squirrel: Indeed, and the relationships where you might look for this, the places where I see it most often, you’ve mentioned CTO and CEO, I see it in technology and product interactions. I see it in tester and developer relations, I see it in business—whatever that might mean, marketing or customer service or something like that—and the technology team. So any place where there’s somewhat different interests, but the security isn’t there, the willingness to have a productive conflict on whatever the topic might be. Where that willingness is lacking, that’s where I see this “Oh, he’s a great person, let me tell you. She’s wonderful. But there’s this problem.” And then the problem is massive and is actually the fundamental reason why the team isn’t effective or isn’t delivering or everyone’s about to quit.

Jeffrey: You know, it’s actually this dynamic that I was reading about on Twitter yesterday, I came across a tweet from Matt Parker, author of Radical Enterprise.

Squirrel: We had him on!

Jeffrey: Yeah, not so long ago. I love Matt and his work, but he had a tweet I felt I needed to respond to. It was somewhat related to this, the tweet said: “every time you engage with others at work, ask yourself, are you engaging in a way that increases collaboration or conflict?”

Never the Two Shall Meet

Jeffrey: And it’s not that I disagree with him, not that I think he’s wrong, but I really expect people to misunderstand and misinterpret it because of this bias towards interpreting collaboration and conflict as comfortable and uncomfortable. You know, it’s like “collaboration is easy and conflict is hard,” but that’s actually not my experience at all. I often find the people who actually will engage in conflict at work usually come by it very easily, and the people who are doing collaboration are often are really working at it, and that there’s an entire dimension missing from this. Of course, I have a very fixed mental model that I think we’ve shared many times on the podcast, which came from an article which seems to have nothing to do with this called The Uncanny Valley of a Functional Organisation. There’s a nice two by two matrix in that article that shows that this is not just a one-dimensional axis between conflict and collaboration, but rather two-dimensional, because it captures another element, which is “are people willing to disagree?” The conflict vs collaboration question is sort of “do you have trust and respect for each other?” But then the point is actually that’s not enough. I think that people often are thinking just about, “do we like each other or not,” rather than “Are we actually disagreeing productively?”

Squirrel: This would be great! I’d like that too! The problem is that I don’t know how to get it and also get effective organizational change—new features, innovation, progress—without some form of discomfort. If I knew how to do it without discomfort, without conflict, I would be a richer consultant.

Jeffrey: This is what I like about your insight here about “as a person, he’s great.” You hear the quality and the qualification in there. You know there’s something coming.

Squirrel: Oh, exactly. That’s why the signal is when the person is telling me that at the beginning of our conversation. If I hear a bunch of things about how you’re interacting and having productive conflicts and learning things and hashing out a way of working together, and then you say, “Yeah, and you know, over time I’ve got to realize that actually this person’s great.” That’s not my danger signal. My danger signal is when the conversation opens that way. “Now, as a person, Jeffrey’s great…” and you can hear the “but-.”

Jeffrey: Exactly. Now the thing is here, we’re talking about troubleshooting. I think it’s worth saying that this sounds like a symptom. If I hear it from someone else, or I find myself saying it, and I think we’re saying to our listeners: if you think about someone this way, “well, as a person, they’re great” and you have this sort of qualification, you’re not really getting what you’d want from the collaboration. So, what to do about it? We haven’t talked about this, but I think we’re going to have similar things that we’re going to do. Which is?

Squirrel: Name the thing that you’re observing. Say what you see.

Jeffrey: If they really are great, are you willing to then be honest with the person? I think this idea, this kind of hidden “but,” all those “this person is great…but,” what it’s actually a symptom of is your failure to share where you disagree with them. What that comes down to in my mind is a lack of trust and respect in the other person, and lacking belief that you’ll be able to work with them effectively. If this is me, then I would look at that as being on me, not on the other person who I’m not sharing my differences with. It’d be easy for me to blame them and say, “Well, you know, they just don’t want to hear this. They’re not open to change.” Like there’s no point in talking about it.

Squirrel: Which could be true! It could be that your product manager doesn’t want to hear about the technical debt that’s holding back your engineering organization. But if you haven’t said anything, you don’t know.

Squirrel: Excellent. Well, we have a whole book written about that and something like 200 episodes on that topic, so I’ll be happy to pick that up again in a future episode. How about that, Jeffrey?

Jeffrey: I think that sounds great.