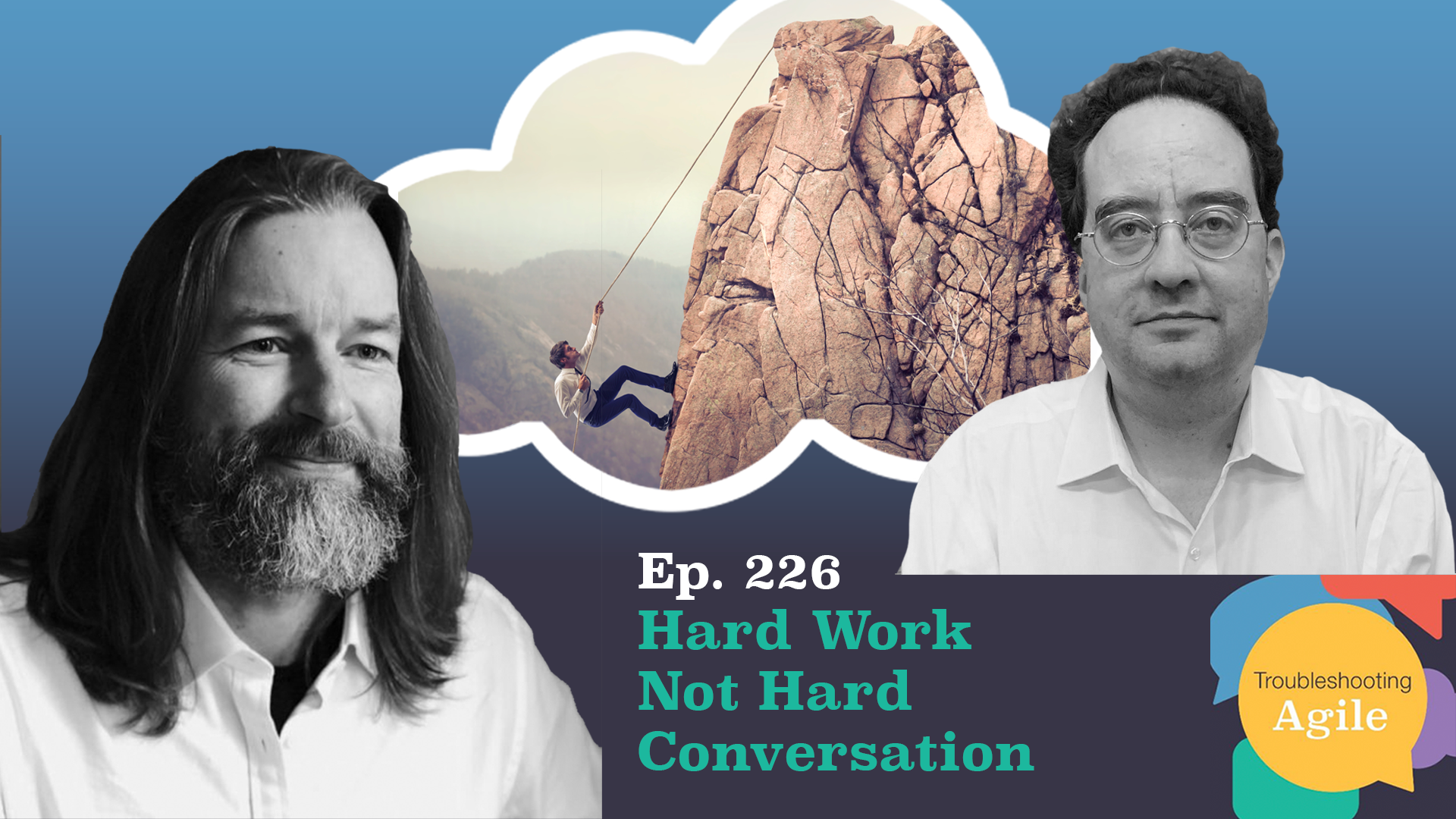 This is a transcript of episode 226 of the Troubleshooting Agile podcast with Jeffrey Fredrick and Douglas Squirrel.

Squirrel notices a pattern among his coaching clients: some prefer to work themselves and their teams much harder, rather than questioning a requirement or discussing trust issues. He and Jeffrey describe ways you can detect and overcome this habit or “twitch”.

Jeffrey: Hi Squirrel. I want to ask you about the details of something you told me about: you had a client who seemed like they’d rather work hard for 2 extra hours a day rather than have a difficult conversation?

Squirrel: Many more than 2 hours, in fact. I’ve had a couple of clients like this and I made a note about it, and then I couldn’t remember which one it was. So for those of you who are my clients who listen to who listen to this, if you think it was you, it probably wasn’t. The situation was that the person I’m coaching kept coming back and saying, “Oh, I’m sorry I’m late,” or “I couldn’t get this piece of homework done” or “this other bit I couldn’t do.” When we drilled into why that was, it was because the person I was coaching was spending lots and lots of extra time working. The homework that the person was not doing and the coaching calls the person was not attending were partly for the purpose of clearing up more time for this person and making things work better. But the person seemed to prefer working harder and doing more to having a difficult conversation, which then would have reduced future work for a long time. So while we’re busy laughing at that, we also ought to remember that we ourselves keep doing that kind of thing anyway. So although we might feel superior and might say, “Oh yes, well, I would never do that.” If you look a little harder, I think you might find that in fact, you do. But I thought the observation was interesting.

Jeffrey: And you’d identified this as a particular twitch that some people have: if there’s a potential for conflict, they just think, “well, no, I’m not going to do that. I’m going to work around this.”

Squirrel: “I can work harder. I can do more.”

Squirrel: “Although this person doesn’t want to come to the meeting, I can go to the meeting and then summarize it for them later and spend hours preparing for the next meeting.” Whereas going to the person and saying, “Why the heck weren’t you in the meeting” might be painful in the short term, but would lead to much better meeting hygiene, maybe canceling the meeting, or something else. These were the kinds of examples that came up over and over again.

Jeffrey: Oh, that’s really interesting. You mentioned the homework you had in mind was having the conversation. But I was thinking of having conversational analysis. If you’re doing the conversational analysis and you say, “oh, I left this meeting, I was really frustrated,” or whatever the scenario might be, as you are writing out your two column case study this is going to show up. You’re going to see this disconnect between what’s being said and what your thoughts are, because I imagine that person who says, “well, I’ll just go to the meeting and summarize,” they might be telling the person “well, I’ll go to the meeting and summarize it to you.” But their internal thoughts are “why aren’t you there,” or “why aren’t you pulling your weight? Why aren’t you doing the thing?” And this disconnect between what you’re thinking and what you’re actually saying aloud would probably be a pretty common symptom here. That would be my guess.

Squirrel: One thing to note is that we’re using some terms here newer listeners to the podcast might not be familiar with, things like conversational analysis. Maybe we should briefly say what that is. Do you want to do that or should I do that, Jeffrey?

Squirrel: Which makes loads of sense if you’re willing to put in the work. That’s exactly the challenge that I’m having with this type of client, where the person says “Well I’d love to do the work, but this other person won’t let me. I have to do all this other stuff.” So doing things like analyzing a conversation to discover how I could have less work to do is a bind that many of us find ourselves in. I don’t want anyone to have a view that I’m acting superior here or somehow saying that I’m not personally susceptible to this. This happens to all of us, I think. The trick is to catch it and to do something about it. What might you do if you notice this particular twitch, Jeffrey?

Each Dysfunctional Dynamic is Unique

Jeffrey: Well, I think it’s going to depend on what flavor you have. The thing that’s interesting me is that within this common overall pattern, different people will be responding differently. In one case, it might be “I don’t want to go have this difficult conversation with the person because I need to ask them to account for why they’re not doing something.” But I had another scenario come to mind, which is someone who might be avoiding the difficult conversation of asking someone to clarify what they meant, something where you might be embarrassed. So the actual content of what might lead you to avoid a conversation is going to vary by person. But we’re saying first to identify that behavior and cause, and then we probably get into the general themes that we recommend. As we discuss in our book, the foundations of good conversation are that you’re transparent and curious. So if you have these these thoughts that you feel are unspeakable, well, ideally you find a way that you can say them. That’s part of the practice of the four R’s, is that you practice revising these and practice saying them aloud to find out a way that’s effective for you to broach these topics that you find difficult. But what people find difficult will vary.

Squirrel: Absolutely. That’s why the analysis is tremendously helpful. There are two groups of people who read our book, the sort of people who say “that was a really good book, I enjoyed that,” and the people who said, “Man, this was a lot of hard work!” The second group of people are getting a lot more from it. Getting to the first stage of pushing the first turn of the wheel to get the process moving, that can be challenging. I’m not going to sell that short. There’s certainly a lot to do to get moving. But doing some kind of analysis, something that’s written, something that helps you capture “what’s the barrier for me? What’s stopping me making progress here with my product manager, with my team lead, with my stakeholder and the rest of the business,” whatever it might be, the thing that writing it down helps you to do is this thing called self-distancing—not social-distancing, but self-distancing—where you get yourself a little bit farther away from the situation and you can see it more clearly. When you do that, you can notice your twitch. “What is it that’s causing me to shy away from this? What is stopping me from asking the person to clarify, commenting that this change to requirements will lead to four or five more hours of work for my team and a late night. What is the thing that actually blocks me?” When you get it written down outside your head and you can externalize it, then you can find those things. That’s what I found actually helps the people that I’m coaching who get into this bind.

Jeffrey: Getting started is often the challenge here, as seen with the people you mentioned who read about it and think this is a good idea, but then do not do it. So one thing I’ll say for people who are interested in getting started, link in the show notes to a monthly free conversational dojo, which is a place to get practice, because it is really a practice. I think one of the the key ideas here is that this is a skill you can develop. But what is interesting to me about this is that what people find difficult to discuss is very individual. One one person has no difficulty in going to hold someone else for account. But then there are some other conversations that they will avoid. There’s very much a personal element here. This is a journey of individual discovery rather than being something where it’s one size fits all.

Squirrel: Which is why we can’t say, “every time you say, ‘Oh, don’t worry, we’ll work harder,’ that that’s your twitch, that that’s the thing to watch out for.” We can’t tell you what language is the the signal for you. You have to do the analysis to get there. If you need the help of a dojo or a coach or something like that, that’s great; you can also do it with a piece of paper and a pen yourself, but the activation energy is high. The tendency to avoid it is like exercise. You kind of don’t quite feel like doing it every day, but when you’re able to do it, you will discover things that are keeping you in the loop of—like my coaching clients—continuing to do more and more work when in fact, there’s something you know you could do to remove that work, but you’re avoiding it. The “work is easier” trap that I’ve seen.

Jeffrey: Yeah, absolutely. But first you have to become aware of it. One of the challenges is to be aware that this is even what you’re doing. So this is something people can check themselves for, and I think it will come up if you’re doing the conversation analysis, you’ll be able to find it.