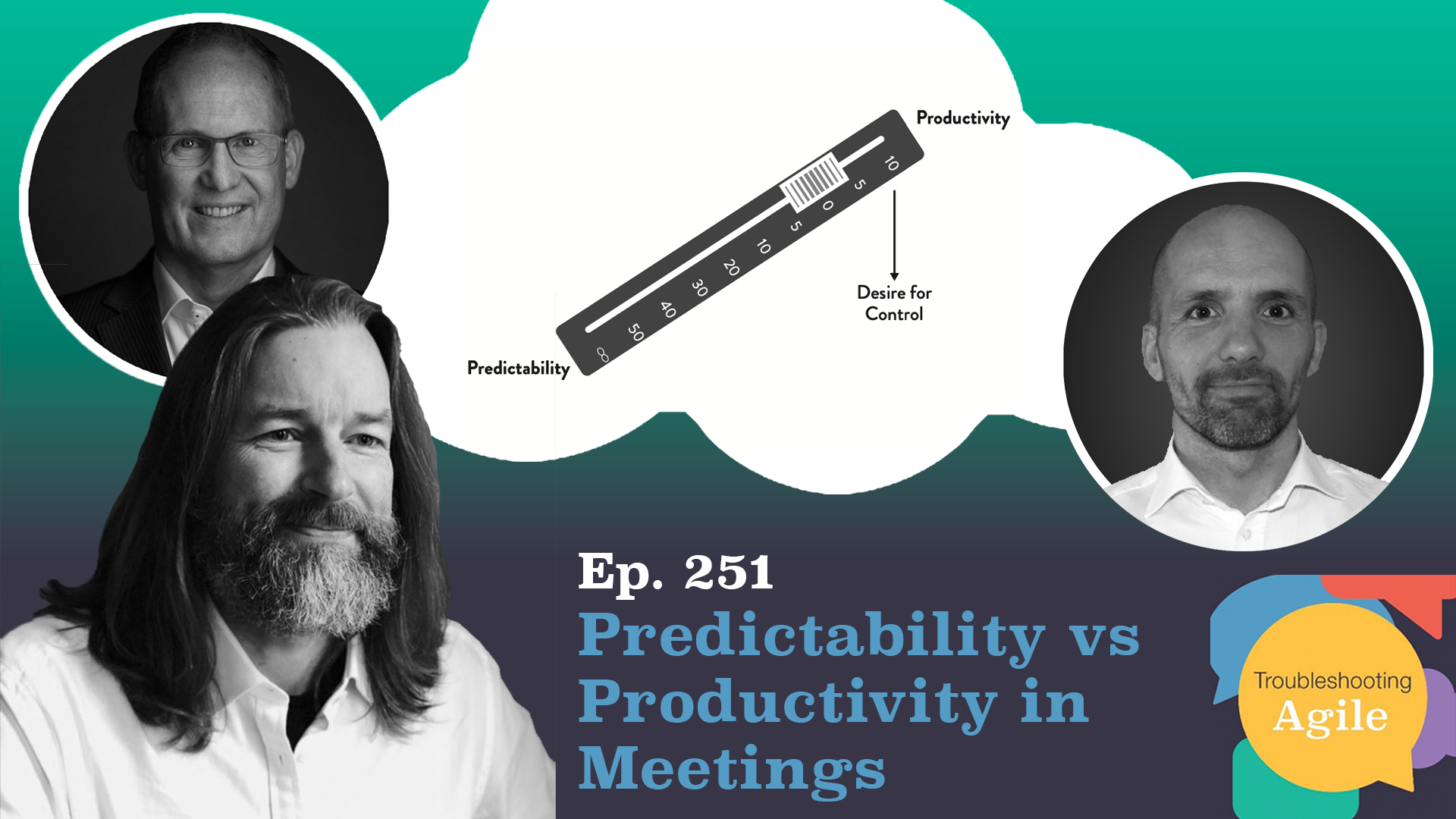 This is a transcript of episode 251 of the Troubleshooting Agile podcast with Jeffrey Fredrick and Douglas Squirrel.

Want to know the agenda? We aren’t going to tell you! Join Jeffrey with guests Pascal Dufour & Ronald Doelen to talk about how the “tilted slider” applies to meetings just as much as other software development process. Recorded live at CITCON.

Jeffrey: Hello and welcome back to Troubleshooting Agile. This is Jeff Frederick. Squirrel? No, unfortunately Squirrel is not here. This is being recorded live at CITCON, the Continuous Testing and Integration Conference. With me I have two guests, Pascal and Ronald. Hello to both of you. Pascal can you introduce yourself?

Pascal: Hello, I’m Pascal Dufour. I’m a software tester and I coach teams. I love the job of software testing, and that’s what I do.

Jeffrey: Fantastic. You’re both multiple time CITCON attendees. This is not your first rodeo, so to speak. Pascal, how many times have you been here?

Jeffrey: And you’ve loved it so much that you helped organize this event, and you wanted to make sure that once we could have it in person, that we could have it here. So that’s a good sign of dedication.

Jeffrey: And Ronald, you’ve been coming to CITCON for how long now?

Ronald: I think since 2008 in Brussels. So it was a few months after my school master training and I learned a lot there I could use directly in the next week. When I saw the Twitter message that it was being organized here, (to Pascal) thank you, I immediately signed up.

Jeffrey: Fantastic. I thought a good topic for today would be the dichotomy between the people who’ve been to CITCON and experienced it versus people who’ve never been, because it’s kind of unusual. This is an “unconference” or “open space conference” and people who’ve never been often say, “What’s the agenda? What are you going to talk about?” And we can’t tell them. Because this is an event where we don’t know the agenda until we’re on site and we collectively create it. I enjoy it. I never want to go back. Clearly you’re both bought in. It struck me that this is a lot like something that Squirrel and I have talked about, an analogy that he came up with called the “Tilted Slider.” Imagine that you have a slider like on a stereo system, and it’s between predictability and productivity. The reason it’s tilted is that organizations say they want productivity, but all their practices tilt towards predictability. And what we hear from people who’ve not been to CITCON is essentially “Tell me that it’s going to be predictable. Let me know what you’re going to talk about.” When actually, the process maximizes productivity, meaning we have productive conversations where people are talking about things they’re most engaged and most excited about, and that can be something they didn’t think of until they were at the agenda-forming event on Friday night. Did that ever happened to you, where you were inspired?

Pascal: Yeah, this last time. Even this time I was thinking like, “that’s a really good topic.” The monitoring-driven development. “Why didn’t I follow that before?”

Jeffrey: Yeah. That’s one that I proposed that we’ll be talking about after this in the next session.

Ronald: Also the previous session where we talked about Subversion vs Git, which was like a trick to explain the whole process. And then we had a really good content discussion.

Pascal: Yes, this is a technique called lean coffee. This is where you, let’s say, join with a colleague to talk about certain topics, but the agenda is not shown upfront. We create an agenda during, just like here on the open space where we have sessions of one hour, but the sessions are way, way smaller. It’s 5 minutes, depending on what fits best. So you talk about the things that you like, that you voted for during the session itself.

Jeffrey: Right. People would often say it’s good practice to have a good agenda ahead of time. How else can people prepare to discuss if they don’t know what they’re going to be discussing?

Pascal: That’s difficult sometimes, if you want to invite them in. For example, we use this technique for a knowledge share and are asked “Okay, what’s it about?” “I don’t know.” “But it said one hour agenda. Do you know how much time that is? I want to do other stuff and it’s one full hour. Is 10 minutes good enough?” Well, that’s not going to happen, right? But after the first time they get it. “I will be there next time.”

Jeffrey: Right. So once people have experienced it, they’re really excited. So people show up, they propose topics, vote on them, and then the highest votes are what you talk about.

Jeffrey: I love this topic, this approach of lean coffee. It’s something I’ve often had my clients do. For one of my current clients, once I introduced it she started running all of her team meetings that way. So their weekly team meeting is something where they can create, can control the agenda every week when they’re in the room, and people talk about what they think is most important as opposed to what she as the boss has decided, and this gets way more engagement. People are much happier. They did it once as an experiment and like you said, they never want to go back. So lean coffee is a pretty direct translation of what we’re doing at this open space into a meeting and it can work at all kinds of spaces and sizes. But Ronald, you’re going to talk about a technique from a whole family of techniques called liberating structures, which we’ve mentioned before. But you have a particular one in mind that you chose as worth people knowing about.

Ronald: Yeah, I’ve been to a workshop on liberating structures and it was amazing, and also open space. I think Lean Coffee is also one of the structures, but the one that I really like is because it can turn around people completely. It’s a best practice from engineering where you say, “I’m going to build a bridge, and I want to know all the risks and how we can mitigate them,” and you go about discovering those risks just by asking the question, “okay, how would I know absolutely this bridge is going to fall over?” Then you have people being creative and thinking of all kinds of stuff. I used it in presenting my plan for an agile transition to senior management and asked them, “okay, how can we together be absolutely sure that this project is going to fail?” I had the managers go nuts naming all kinds of techniques that they use to sabotage projects.

Ronald: Then the second question—which was terrifying to ask, wondering if I would end the day on the curb—”So which of those techniques would you normally use in these kind of projects that could potentially kill this project?” The CEO answered first and said, “I would ask you for status reports and all kind of other stuff.” Based on this technique, we agreed on a certain way of working, and I had near complete freedom in this transition. So for me I wasn’t sure my job would survive the technique, but in the end it paid off compltely.

Jeffrey: So you were very you felt very uncertain how it was going to unfold. Very low predictability.

Jeffrey: So the process for any given project would be to start by asking “If we wanted to intentionally sabotage it, what would we do?” In your example one response was “I could ask you for status reports all the time.” This actually fits very well with the theme. “I can keep asking you for predictability. Give me estimates. Give me better estimates. Give me updated estimates, new projections.” Then the second step is to examine the normal behavior and say, “what do we normally do that is on our list of sabotaging techniques?” In your example, they realized “we do ask for those kind of status reports on updates all the time. Okay, maybe we should then stop doing those things.” It sounds like this was a case where the CEO recognized their own behavior in the list of sabotaging behaviors.

Ronald: What also helped is he had a background in engineering, really traditional. So it was also an eye-opener for him. But I really liked it. I also use it in a lot of planning to find all the risks that are there and put mitigation in place, it really helps. I think engaging people is key. I began thinking first about how I was going to engage people in this practice, and there liberating structures really can help.

Jeffrey: Right. It’s interesting here, the thing in common is that the value, the productivity comes from people being engaged. If you read management literature the way I do, this is engagement. Employee engagement has been a big topic for the last five, eight years as people recognize it’s really key to productivity overall. Part of what we’re saying here is if you want to have that level of engagement, you might need to adjust your slider. Push it up towards the productivity end, which means having less predictability of content. But, we actually talk about now using the predictability of form, right? We are talking about structures. These are predictable patterns where we are asking people to engage in a certain format, but we don’t know what’s going to come up. It’s the unpredictability of content and the ability of everyone in the room to contribute that leads to the engagement. People who’ve read our book Agile Conversation will recall a bit where we talk about the need for people to add their own egg. We’re talking about approaches here that allow people to add their own egg. Now, maybe it can be a bit scary to people who’ve not experienced it. They say, “Well, tell me what’s going to happen, what’s the agenda?” I imagine when you’re dealing with the CEO, he might have found it a bit odd that you couldn’t tell them what was going to be coming out of it. But once people have experienced it, they don’t want to go.

Ronald: Also sometimes I make the mistake to go to traditional conferences, and then in the first 5 minutes I know this is why I like unconferences.

Jeffrey: Yeah, we were talking before we started recording about how the engagement levels are so different. I’ll be at a traditional conference next week, the DevOps Enterprise Summit. I know from experience that after doing CITCON, an open space event since 2006, when I go to a normal conference and the speaker is talking, I want to talk back. It would be more productive, but it doesn’t match the productivity that these events promise their attendees, which is probably why for many years people said that you learn the most in what they call “the hallway track” outside the sessions, a phrase I picked up I think from P.J., who was a co-organizer for CITCON. I want to thank you both for coming, Pascal and Ronald.

Jeffrey: And thank you for people in our live audience here at CITCON.