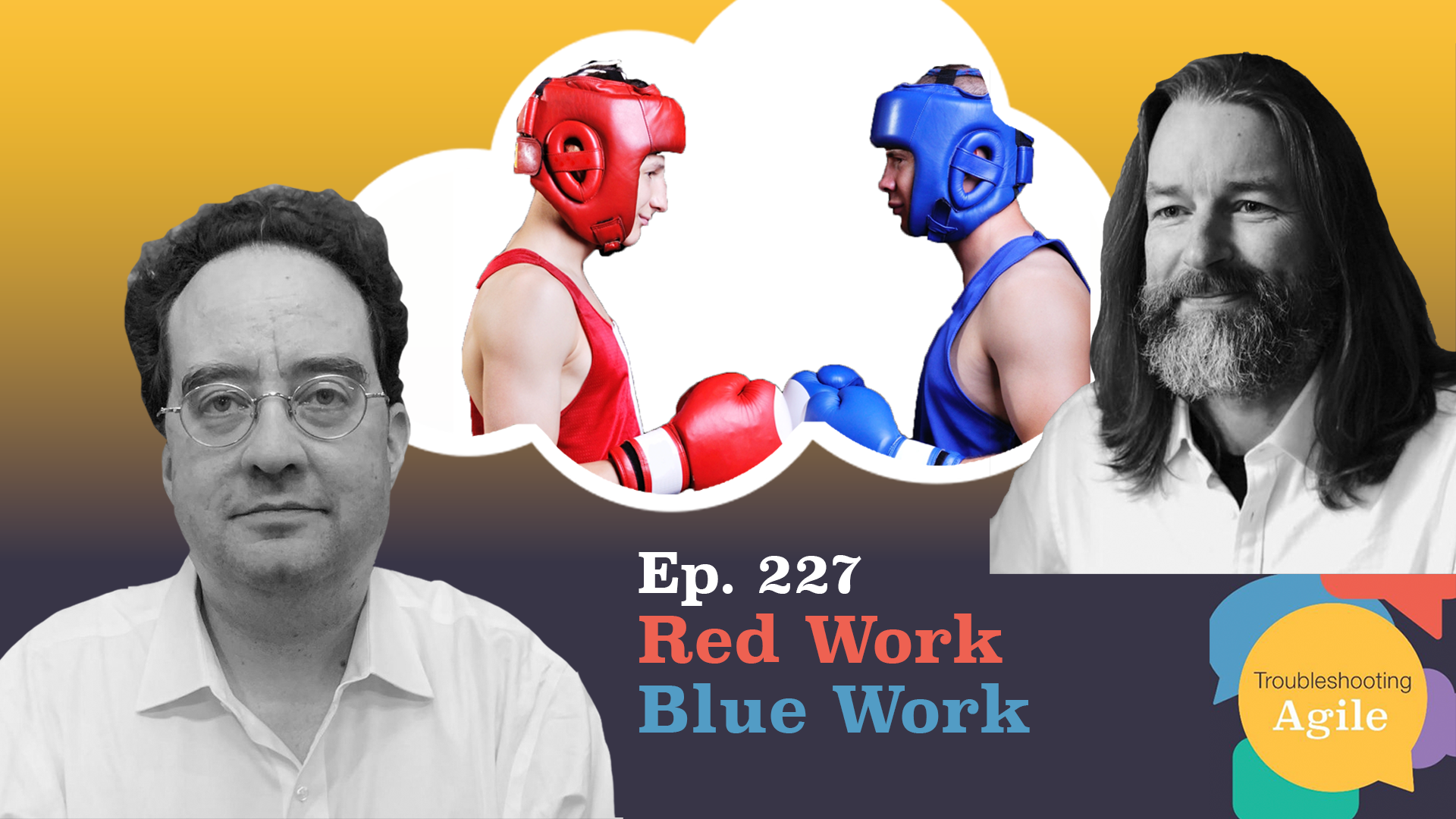 This is a transcript of episode 227 of the Troubleshooting Agile podcast with Jeffrey Fredrick and Douglas Squirrel.

Jeffrey describes a new idea from Marquet, the division between “red work” (execution) and “blue work” (thinking and planning). He and Squirrel discuss how to balance these methods in agile teams, and when an imbalance might be useful.

Jeffrey: Yeah, that’s right. It’s kind of funny how this came out, David Marquet is someone we’ve talked about before.

Squirrel: Yeah. He’s the Turn the Ship Around guy, isn’t he.

Jeffrey: Exactly. I often recommend to people one of those animated talks, called “Greatness.”

Squirrel: Ooh, those are good.

Jeffrey: Yeah. I had recently been recommending it to several people but to be honest, I’d never actually read his book. I thought, “Well, I’m going to have to fix this.” I was at my local library and I went and said, “Well, let’s go see if they have that on the shelf.” They didn’t. But it turned out he has a second book that I’d never heard of, published in 2020, the same year our book was published, and the title reached out to me: Leadership is Language.

Jeffrey: Now that’s a thesis I can get behind! The subtitle is “the hidden power of what you say and what you don’t.” I thought “that sounds really interesting, I’m going to go pick that up.” So I did and started reading it and I thought, “this is really neat.” There’s a lot in it that corresponds with our book. He’s got a similar history of what kind of attitudes came from the Industrial Revolution. But I want to talk about a very particular element, a particular idea he introduces here, because I think it can be a very useful one. He introduces two executive type people to be the characteristics of these. He describes the first one as a very hard-driving, all action all the time executive, get things done, can-do attitude. Let’s execute to 100% or maybe 110%.

Jeffrey: Yeah. The other executive is someone heavily into analysis, who is always looking to think and check the facts, but maybe a little bit short on the execution side. So the instinct is that there’s a dichotomy here, that these people look like opposites. But the idea is that no, they’re actually similar in that they are both spending too much time on the extreme and they should both come towards the center. He does this by labeling the type of work that’s being done, and he calls it red work and blue work. Red work is the driving execution focus: we want to reduce variation, we want action. Blue work is your thinking and decision making. He says that you need to have a balance of both of these, and the problem is that when you’re out of balance in either direction, you’re going to be ineffective. He goes forward to say that we use different language when we’re in these different mindsets. But I thought to start with just this idea of saying there is red work and blue work was useful. When we have this kind of phrase we can use with each other, then it becomes very useful shorthand to be saying something like “I think we maybe need to move into some blue work here,” or, “I think we spend a lot of time on blue work and we’ve got to limit it. I think we need some red work to start generating data.” So that was an interesting thought. I’m curious what you think about that as your first response.

Squirrel: Oh, it gives me lots of thoughts. For example, I’m reminded of the Cynefin framework. Hint: never name your framework for consulting after a Welsh word. But the Cynefin framework has one element where you’re operating in the complex domain, where you don’t know quite how things work and whether this action will have an effect on that result, what result it will have. In that domain, one of the key things that you want to do is probe and then sense and then respond. So the loop that you’re often going through—I was just talking about this in one of my community events earlier this week—is to be doing some red work to try to generate new information, and then you want to switch into blue mode and reflect on the information you gathered, which will then influence the next red work that you’re going to do. So when you’re in that repetitive learning, “iterating toward a solution” loop that so many of us try to be in, then having this distinction is really important.

Jeffrey: I like that idea there of iteration, because it fits well with one of the points he makes, which is that many people make the mistake of having there being red workers and blue workers. He takes us back to the scientific management Taylorism type thing when there was the idea that the people doing the work were were supposed to be just execution, and it was the job of management to be the people who were reflecting. You had this division between the red workers and blue workers. Part of what he says is, no, we are going to have this difference in work, but we shouldn’t have the difference in workers. We do want people to be able to be moving back and forth. One of the advantages is if the people who are doing the work can reflect on it, you’re going to have a more rapid learning cycle. That’s what I got out of what you were saying: someone who is trying something and seeing the result, and then trying something and seeing the results; having that very rapid iteration cycle fits well with this idea of taking the workers and saying “everyone should be having this combination of red work and blue work.”

Squirrel: I’ll defend a slightly different point of view. Long ago we had a episode of this podcast called In Praise of Taylorism, where we were arguing in some cases in favor of some of this behavior, some of this red work focus, separated from blue work. I came across that with a client recently. The culture of the company was one in which there were domain experts and there were executors, and those executors were in the “I.T. team.” One way you can often tell this is happening is by how groups are named. They were supplying a service of I.T. to people who knew this particular domain. I gave them quite a hard time for this because they were also trying to be a very innovative start-up feeling kind of company. I said, “You’re not actually doing that. You’re not doing rapid learning.” But they had been quite successful in a limited sphere by exploiting the tremendous knowledge of the domain experts and translating that rather mechanically into the action of the executors. Blue workers thinking about how things should work and red workers executing. There wasn’t a lot of learning, so it wasn’t that they were adapting and changing. They weren’t really ready for new things in their market. But their relatively new and relatively unexplored market was one they understood better than others and better than customers. So in fact, they had done pretty well for a while with a red-blue split, but the end of the road was coming, and I don’t think they knew it.

Jeffrey: You know, I do like your example because one thing it highlights is that this cycle between red and blue doesn’t mean the same thing everywhere. Context matters tremendously. Here, you kind of had stored blue work. I have in mind this big vat, “we have ten gallons of blue here that we’ve done,” and they were draining that by putting what they knew into practice. When we get to the limits of our knowledge, then we need to come back and refill the tank.

Squirrel: Exactly. That’s what I think they were missing.

Squirrel: There was a lot of stored up knowledge about how the market worked now. But as the market evolves—and their market is substantially changing, new people are entering, their world is shifting, in their world data is very important and there’s lots of new ways to gather it—that’s not going to stand them in good stead for the future, but it was doing fine for them. They’ve built a good, solid business as it is.

Jeffrey: Yeah. This analogy reminds me that maybe part of the problem here is that the stored up knowledge we have can also have an expiration date. So, yes, I’ve got ten gallons of blue.

Squirrel: It’s going to start to smell after a while, and going off.

Jeffrey: Exactly. It’s not that it’s wrong, it’s that it is out of date with the market. That’s one of the challenges of having people relying too much on ancient knowledge, we talked about ancient wisdom. Maybe that’s the distinction between ancient wisdom and ancient knowledge: insights versus thinking “No, I know exactly how things are because I worked in that market for ten years.” Yeah, that was ten years ago. So maybe there’s something new here to learn. But coming back, I think the main insight here you shared is that your cycle between red and blue can vary and that can be a good thing. You don’t need to think, “well we’ve spent a week executing, let’s go spend a week thinking about it” if in fact, you’re in the middle of exploiting something that is going to be a six-month execution path based on what you already know.

Squirrel: Absolutely. And of course, you can have different people doing different bits at the same time. So somebody is doing some reflecting on what’s already happened and someone is gathering new data. The danger is if you completely divide your organisation as in my example, and the blue workers never do any execution and the red workers never do any thinking, then you’re missing opportunities to learn because there’s overlap and cross-pollination that should be happening that isn’t. That’s where you’re going to get substantial new learning and adaptability. So maybe what listeners could do is to try to have a think about what their people and time allocation is of red and blue, and reflect on whether that’s a good mix for them.

Jeffrey: I’ll throw in one other line from the book which I liked, which is, a lot places have a can-do attitude, but you also want to can-learn attitude. That’s as important. So good issue there about having the balance.

Squirrel: There we go. Thanks, Jeffrey.