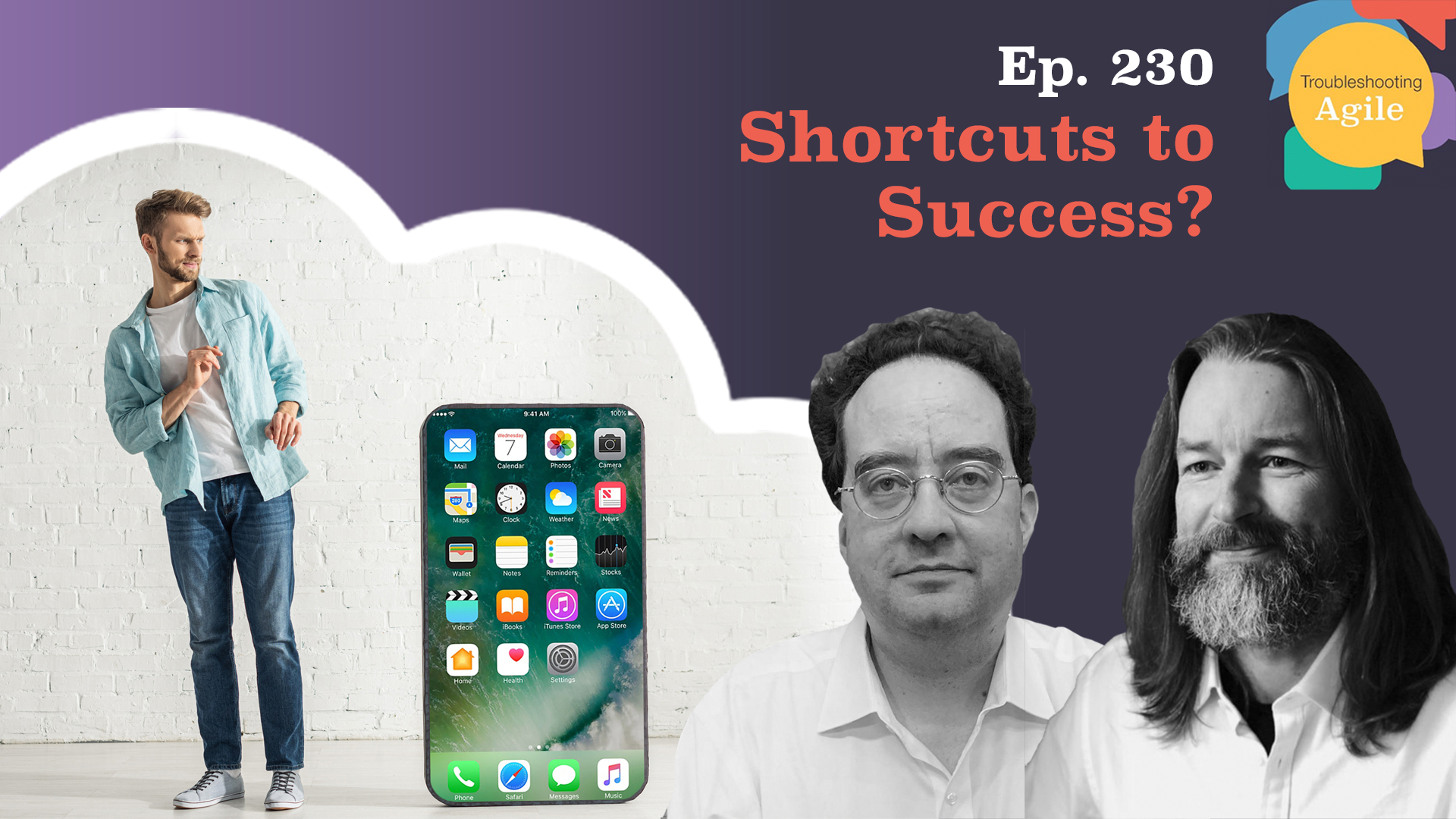 This is a transcript of episode 230 of the Troubleshooting Agile podcast with Jeffrey Fredrick and Douglas Squirrel.

Jeffrey and Squirrel reflect on a tweet from Ken Kocienda about what worked for Apple in designing the iPhone, what they think is missing from this advice, and what it tells us about improving our own delivery.

Squirrel: As we often do, we are starting with a tweet. It’s one you found, though.

Jeffrey: Yeah, that’s right. And it wasn’t even one of yours!

Squirrel: Not this time.

Jeffrey: So I was browsing Twitter—which is a habit I’m trying to cut back on, but haven’t gotten there yet—and I came across something really compelling from someone named Ken Kocienda, who apparently worked at Apple, and he’s written a book about his experience called Creative Selection: Inside Apple’s Design Process During the Golden Age of Steve Jobs. I didn’t know that when I saw the tweet. What struck me is he was talking about the contrast between what he sees people talking about versus what they did at Apple when they worked on the iPhone. This is what he says:

I see so many tweets about agile, epics, scrums, story points, etc. and none of it matters. We didn’t use any of that to ship the best products years ago at Apple. Exactly none of the most common approaches I see tweeted about all the time helped us to make the original iPhone. Oh, and we didn’t even have product managers. Do you know what worked? A clear vision. Design-led development. Weekly demos to deciders who always made the call on what to do next. Clear communication between cross functional teams. Honest feedback. Managing risk as a function of the rate of actual progress toward goals. I guess it’s tempting to lard on all sorts of processes on top of these simple ideas. My advice: don’t. Simple processes can work. The goal is to ship great products, not build the most complex processes.

A Journey, A Destination

Jeffrey: I thought, “Well, that all sounds great, until the end, with ‘building the most complex processes.’” So right and so wrong at the same time. Not that the goal is to build the most complex processes, but its kind of missing what processes are for. Because the reason people have processes is to try to achieve those things that he said worked. The process isn’t there as an end in itself, or shouldn’t be anyway; instead the process is there to check in and say, “hey, are we getting the results we want? Is this working for us?” The process is there to remind us to ask these questions, as opposed to just hope that you end up with the right dynamics. Hope is great. If you can get lucky, I recommend that first! But aside from that, the whole point of a process is to communicate to people, “hey, here are some steps that might help you achieve this end.” So I really liked the ends that he has in mind. But to blame processes as somehow an inhibitor to that I think is actually misleading and not good advice to people. What do you think?

Squirrel: Well, it reminds me of my reaction to the book Five Dysfunctions of a Team, which was to throw the book across the room when I got to the end, because I kept expecting the part where it would say how to do the good things that he was describing. It’s sort of like saying, “in order to run a marathon, the first thing you need to be able to do is to run a half marathon in a little more than an hour. In order to be able to do that, it would be really good if you could run a mile in about five or six minutes. If you can do all those things and then add them all up, then what you’ll have is a way to run a marathon in a world record time, and that’s wonderful.” It just doesn’t tell you a single thing about how to get to be able to run a mile in 6 minutes, or half a marathon in an hour, or something like that. It doesn’t help you at all with how to do it. In Five Dysfunctions of a Team, Lencioni just says, “Here are some wonderful things. These are dysfunctions. You shouldn’t have them. Make sure you don’t. By the way, if you want to learn how to increase trust, try doing a ropes course.” That was the moment where I threw it across the room.

Jeffrey: Yeah, the ropes course tip has really stuck with you.

Squirrel: Boy has it ever! It’s just such useless advice for actually achieving the outcome, and the book is so great at describing the outcomes. This tweet is sort of a two-minute version of the same. All these great results. “Here’s what you should be aiming for. Just do these things.” But it’s like saying “Just run the mile in 6 minutes.” Great. If I knew how to do that, I’d be done.

Jeffrey: He doesn’t even say “do these things.” The only “do this thing” he has is weekly demos to deciders, which is starting to sound like a process, isn’t it? Everything else is things you have, rather han do: have a clear vision, have clear communication, have honest feedback. “That’s great. I want to have those things. Tell me what I need to do to have those things?” “No. That’s not going to be covered here, at least not in this tweet.” I think once you do start saying, “what are the things you do to have honest feedback?” You start to have something that looks like a process. Now I want to say at the same time I do have a lot of empathy for Ken’s tweet here, because it’s certainly the case that a lot of people get caught up in the process and start treating the process like the end goal. You and I have talked about this before about “Scrum by the book.” People who say like, “oh, we can’t do that. That’s not Scrum.” Whether the right or wrong, they’re missing the point, which isn’t to be doing Scrum, but shipping software.

Squirrel: And aiming toward these types of goals that Ken lists, which are fantastic. I’m not objecting to the goals, it just doesn’t go far enough, just like Five Dysfunctions of a Team or my abysmally bad running advice. Since I’m not a marathon runner, don’t listen to me. But also I’m not ready to listen to Ken yet on these topics. Maybe if there were more about how to achieve these things, what steps you could take, that would help me more.

Jeffrey: I had a strong reaction to this tweet and I actually did a rare thing: I took a screenshot on my phone, I thought “I don’t want to lose this.” I felt like I should be able to do something with this. I want to show it to people. I do want to show people what he said worked, because I think there’s something very valuable in it. I think it’s very valuable as sort of a North Star, that we can ask “are we achieving this, are we falling short, where we are falling short what are we going to do,” and iterate our way to it. So there is an element that I really do like in what he has.

Squirrel: “If my split times in the mile are 12 minutes, I know I’m a long way off running a mile or marathon in world record time.” Fantastic. But what I need to do to address that is certain types of exercises and stretches and eat certain kinds of foods and lift weights with my pinky finger or whatever. But the steps are the part that’s missing for me.

Jeffrey: Yeah. It’s funny because actually what I want to do with this ends up becoming a process, like “once every couple of weeks let’s go ahead and pull up Ken’s tweet and say, ‘how are we doing against these goals?’”

Squirrel: Which would be great! There’d be nothing wrong with that.

Jeffrey: Yeah. In reading this I wonder how many people out there—if they look at their own process and what they do with their teams—can articulate what that process is supposed to achieve? Can they look at it and say, “we do this part of our process to achieve X?” “This is here for honest feedback,” or whatever it is.

Jeffrey: That’s right. So anyway, that was the exciting tweet that really stuck with me and I wanted to talk about.

Squirrel: Absolutely. If Ken is listening, please come on or send us an email! We’d love to hear from any listeners, including if you disagree with us. Thanks, Jeffrey.