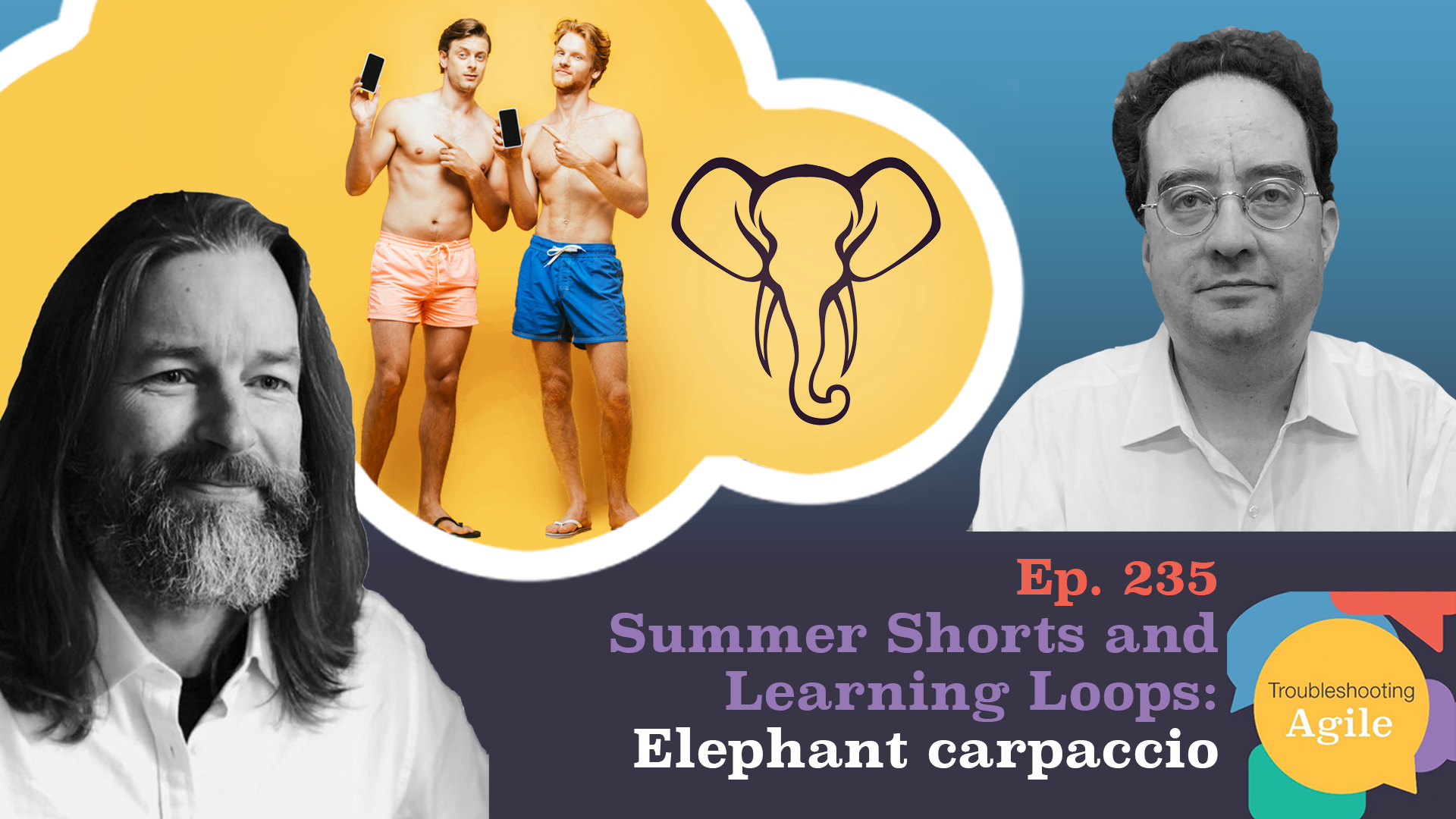 This is a transcript of episode 235 of the Troubleshooting Agile podcast with Jeffrey Fredrick and Douglas Squirrel.

Taking iterative development to heart, Squirrel and Jeffrey discuss a learning loop topic, Summer Shorts and Learning Loops: Weekly planning, in five minutes or fewer. Take just a few minutes with us to improve your team’s learning and speed!

Squirrel: So there are our theme for the summer is learning loops. And Jeffrey, when is a learning loop better.

Squirrel: Exactly. So that’s what we’re going to do this summer is summer shorts. So this week we’re going to talk about a learning loop topic. And Jeffrey, we only have 5 minutes. Do you think we can do it?

Jeffrey: Oh, I think we can.

Squirrel: Great. Then here we go.

Jeffrey: All right Squirrel, today’s topic is “elephant carpaccio.” What is it and how is it a learning loop?

Squirrel: Well the most important thing to understand here is what carpaccio is. This is hard for me as a vegetarian to come up with. Jeffrey, you’re a meat-itarian. Do you know what carpaccio is?

Squirrel: So thin that you can see through it. That’s the crucial idea, that you can take your elephant—your giant project or whatever it is that you’re working on—and you can slice it into pieces that are thinner than you could imagine. I usually try to blow people’s minds by saying “you can do this once a day. You could release new pieces of software that allow you to learn, that test a hypothesis, that move you forward, once a day.” But I can do more than that today, because I had a client who told me that they moved from releasing maybe once a month or once a week to releasing five times a day. It’s actually blowing their minds and they’re actually having trouble adjusting to it. But I said, “this is good. This is the right kind of learning to have! How can you keep that pace up and what can you adjust to make that happen?” So part of the trick is to expand your horizons, expand what you’re imagining. What could you learn from your customers if you were releasing five times a day, or once a day? What opportunities would that create for you? Then you can wonder, “Well gosh, what are the skills I need to accomplish that?” I don’t think we’re going to teach that to you here in this session, but we can at least blow your minds a bit and prompt you to consider what you could do if you got there. And just to blow your mind even a little bit more: I had a client some years ago who was in biotech. When their software would run, it would give people results that might cause them to cut off parts of their bodies-

Squirrel: -so the results they were coming up with really mattered, right? You didn’t want to get it wrong. So they said, “yeah, we release every six months because we have to do all our quality checks. The quality people tell us we have to do this. We can’t learn that quickly.” The salespeople of course were absolutely beside themselves. They couldn’t get the progress they needed. We got to every two weeks, which was just as mind-blowing in the biotech context as some of our listeners may have found five times a day to be. This was absolutely nuts. It was something you couldn’t imagine, but the results were amazing. It turned out that some of the barriers they thought were there were not. The quality assurance people said “this would be wonderful. We’d love to do smaller things as long as you document carefully what they are.” So the trick here is to get to a very tight loop, more than you can imagine, and make sure you have a clear hypothesis that you’re testing. The opportunities are are tremendous.

Jeffrey: And one point I’d like to test with you is about who is involved, because I know Alistair Cockburn—who coined the phrase elephant carpaccio—sometimes said that the problem is if you have teams where it’s just the developers saying, “well, tell us what to do,” and they’re asking the PM to slice things up. They don’t always know the right way to slice it. So who’s involved in determining the slices? Is this just coming from the business and everyone else says “okay fine we’ll do it?”

Squirrel: No, no, no. That certainly wouldn’t work. What you want is a joint design process, something where the people who are knowledgeable about how the business works come in. In my example with biotech, you’d want people who understand what are the testing materials, what is the biological input that’s going to come in that we’re going to be testing, as well as the engineers who know how to run exactly the right script at exactly the right time, and how that can be adjusted and improved. So you want a joint process there.

Jeffrey: All right. That’s a software version of Carpaccio.