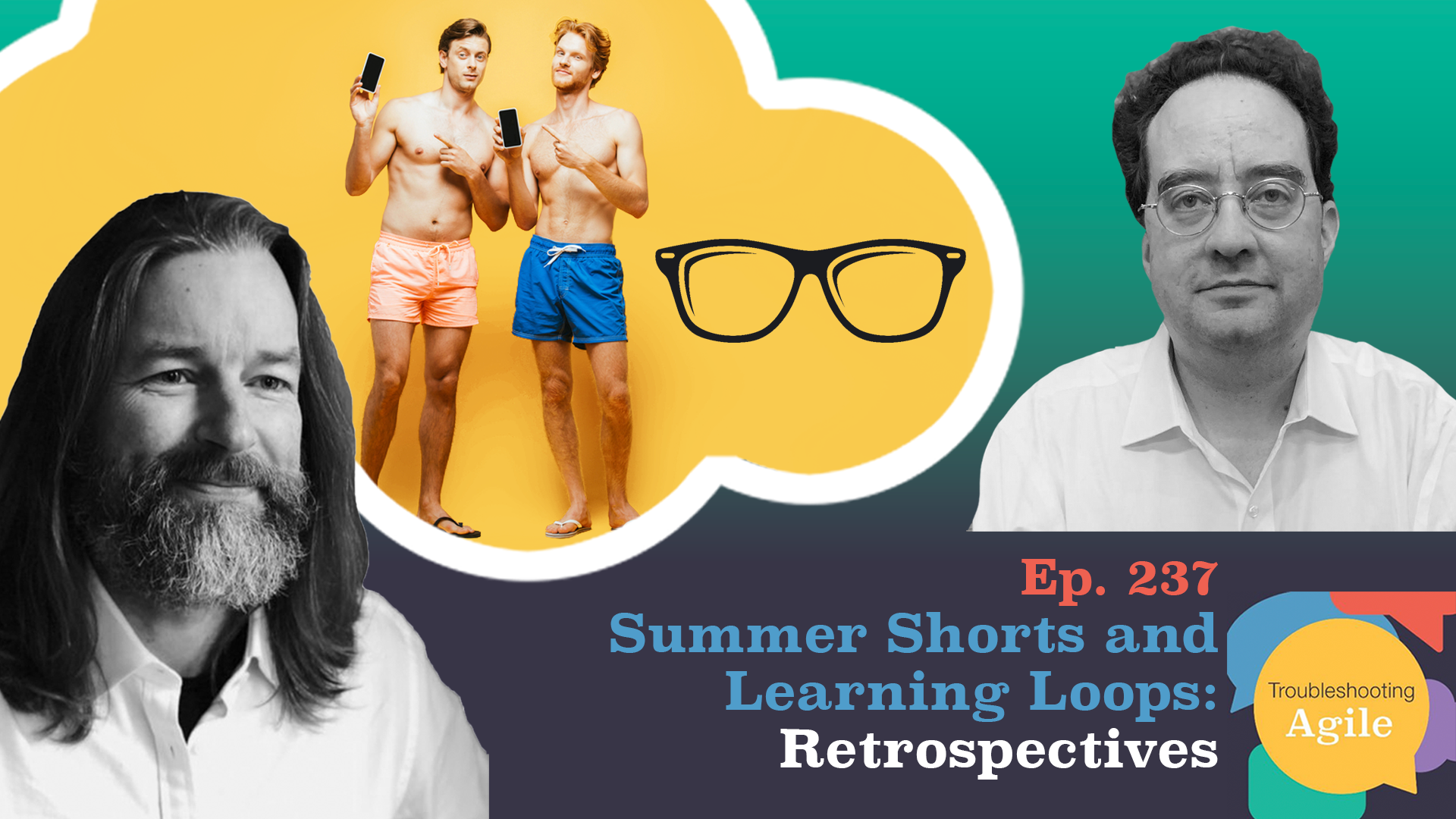 This is a transcript of episode 237 of the Troubleshooting Agile podcast with Jeffrey Fredrick and Douglas Squirrel.

Taking iterative development to heart, Squirrel and Jeffrey discuss a learning loop topic, Summer Shorts and Learning Loops: Weekly planning, in five minutes or fewer. Take just a few minutes with us to improve your team’s learning and speed!

Squirrel: So there are our theme for the summer is learning loops. And Jeffrey, when is a learning loop better.

Squirrel: Exactly. So that’s what we’re going to do this summer is summer shorts. So this week we’re going to talk about a learning loop topic. And Jeffrey, we only have 5 minutes. Do you think we can do it?

Jeffrey: Oh, I think we can.

Squirrel: Great. Then here we go.

Jeffrey: Retrospectives are so interesting because they went from—in the early days of Agile—being one of the stars of the show, I remember Alistair Cockburn once said if you had nothing but retrospectives you could derive all the rest, to today where retrospectives are probably one of the most maligned parts of Agile process. I hear people find that their retrospectives are boring, dull, and lifeless, so what’s the what’s the gap between the two? Hint, the question is “are you using it as a learning loop?” Alistair’s whole claim was that if you’re using retrospectives correctly, you could learn everything there is to know about Agile. You could re-derive it all yourself from your own experiences. And how do you do that? Well, you might have gotten already that these learning loops are in the form of a prediction, and then you take action, and then you reflect back on how things went, between what you predicted and what actually happened. Now, if you look what happens in a lot of retrospectives, people come in and instead of doing that, “what did we predict and what happened,” instead they’re saying, “how do we feel about what happened? Who wants to put cards on the board?”

Squirrel: Jeffrey, wait a minute. So you’re saying in a retrospective we would talk about the previous retrospective?

Jeffrey: That’s right! The point is in the previous retrospective we came up with some changes, because we said, “there’s something that’s not going as well as it could” or “something we should start doing” or “stop doing” or “do more of.” We defined an experiment in the retrospective and then we ran the experiment in the time between retrospectives. So we come in to our new retrospective and the first order of business is, “well, how did that work out? Those things that we tried, what actually happened, what was our experience?” This is our opportunity for learning. There’s there’s a phrase that says “there’s no action without learning. There’s no learning without action.” But actually, there’s no action without the potential for learning. The possibility for learning. We give ourselves that possibility when we take that moment to reflect back and say, “how did this go versus our prediction? We made this change for a reason. Did we achieve what we wanted to or did we not?”

Squirrel: So you’re describing a situation where there’s an output from the previous retrospective, and then we do something with that output and then we feed it in as input to the next retrospective. That sounds like a learning loop because we’re going to have information passing around a loop. This sounds very valuable. Why don’t people do more of that?

Jeffrey: I think it’s a question about what a retrospective is. The focus on learning I think is something that’s been lost. A lot of people think of a retrospective as merely “we’re looking back on a period of time.” And they think of only the time period back to the previous retrospective, but they don’t think of it extending to the output of the retrospective. So as a result there’s not this same idea of “are we holding ourselves accountable for the decision we made last time?” We’re sort of only reacting in an unstructured way to what our experience has been as opposed to “there’s a structure to this, are we getting the payoff? Are we learning? Are we getting better?” To me, that’s where the real power and excitement of retrospective is, is they give continuous improvement. We should have the feeling of “yes, we’re getting better. Yes. These changes, these things we discuss, we come in and we solve problems together. We come up with solutions. We try them. We run these experiments and we have this sense of momentum that’s building that’s exciting and energizing.” That’s what retrospectives can give you if you have that focus on learning.

Squirrel: I sense a theme. It’s coming through all of our learning loop discussions this summer, and that is if you’re bored in whatever process you’re following, whatever is supposed to be a loop but isn’t, that’s a signal that your loop is broken. So try to create more excitement. How can you get more excitement? Create a narrative, something that’s happening over and over again, some sense of movement. And that’s exactly what we’re describing here with a retrospective that has an input from the last retrospectives output.